Skip to content
Posted on April 18, 2013 by Kolapore Gardens

Alot of people, especially those who don’t live around here, ask me where I got the idea for the name of my farm – Kolapore Gardens…

Kolapore is an unusual word and as far as I can tell its origin can be traced back to India, where Kholapur is a large city.  Once believed to be inhabited by a demon, Kolhasura, who was eventually slayen by Mahalaskmi, much to the glea of the local communities, I’m sure, Kolhapur retained the name and was an important spot for Shakti worship.  For those of you who are unfamiliar with Hinduism, my understanding is that Shakti is a sacred feminine force or energy that permeates the universe, creating, changing and liberating.  This primordial cosmic energy is said to have set the wheel of manifestation in motion, essentially getting everything started!

Kolaphur is also home to the largest Ganesh (remover of obstacles) statue in the world – 85ft! 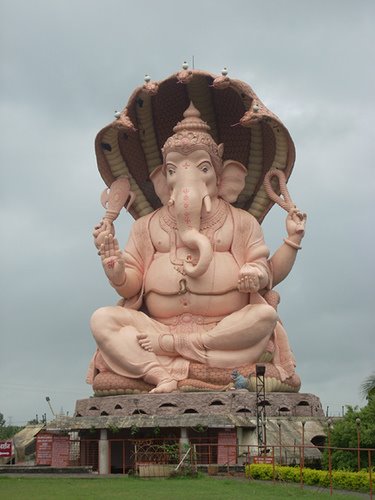 Its’ also the name of a small hamlet very close to the farm.

The community of Kolapore was established in 1884.  Originally called Paradise (no wonder why!), early settlers decided to change the name.  There are a string of communities scattered throughout this land that are host to names from the Indian subcontinents – Kolapore, Ceylon, Lucknow, and many more I’m sure.  So why all of the Indian names?  The earliest settlers certainly weren’t of Indian origin…   Relics of our colonial past and Britains’ dominance of India and reliance on it for tea, spices and resources.

So as I gear up for another springs, I`ve been reflecting on some of the obstacles I face – making systems on the farm more efficient and trying to work with that primordial cosmic force from which creation unfurls, as opposed to against it.

Here`s some photos from the last week or two – a note – as I get busier in the greenhouse and gardens you can expect to see less frequent postings here – I would assume that no news is good news!